The beauty of Switzerland

After a long 12.5hr of flight (and that means we worked almost 15hrs), we arrived in Zurich - Switzerland. I have been looking forward to this flight... simply because... it's gonna be another holiday where I get to meet my friends *yeay yeay

And talk about how lucky and such a coincidence it was for me to get this flight...
Gaudi invited me to become of the facilitator for their AIESEC Leadership and Development Seminar in Zurich...
I replied that I'd love to, but afraid I can't coz our stay won't be that long (3-4days of LDS plus pre-conference meeting) and I can't change my flights yet.
Who knows... when I checked my new roster soon after that, I GOT IT!!
Well... sorry that I can't make it for the faci but at least we can meet up :)

We walked a little, put my big bag at his place *I'd be going to Bern anyway* and then off for lunch. Gaudi showed me around the city, crossed the bridge to the Old Town and we headed up to the rows of pubs and restaurants. 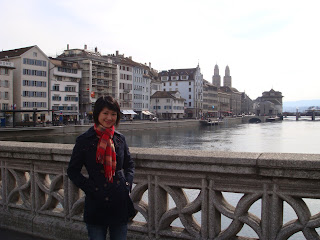 There's always time for a picture despite the hungry stomach

Italian food for lunch :)
I ordered a clam soup *can't remember the name* which was YUMMY... and spaghetti with black truffle *Oh my..my first truffle.. haha
The portion was alright, but the cream was really thick and therefore I couldn't finish my meal.

Later on... we went to this church where we climbed up to the tower :) 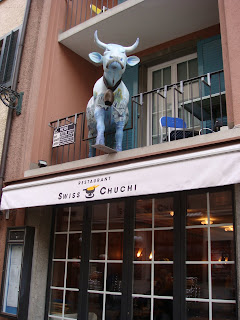 One of the restaurants, a Swiss resto (they're proud of their cows) on our way to the church... 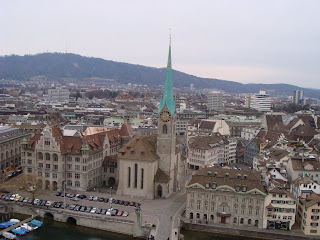 The picturesque view from the tower 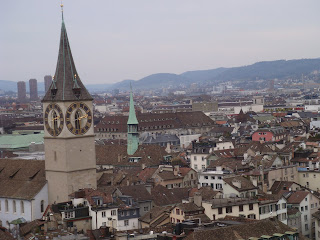 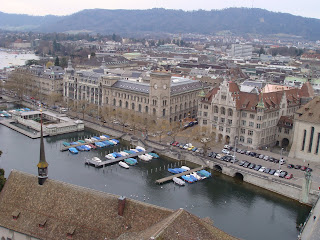 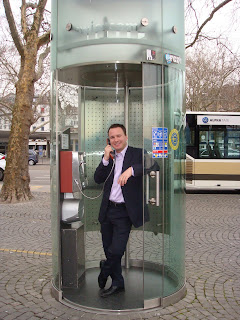 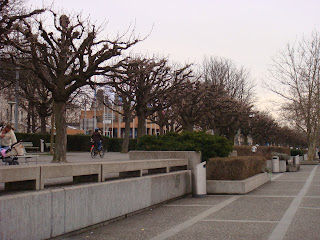 A walk on the embankment
I love the trees A clown surrounded by the trees 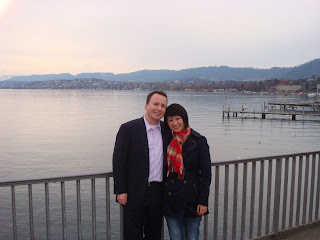 Gaudi and I on the bridge
A stranger took our pic too *ahh..royalty!
Coffee is a MUST in Switzerland. So, we went to the always crowded Spruneli to sip some
We ordered 2 cups of coffee with Swiss liquor and sweet cakes... 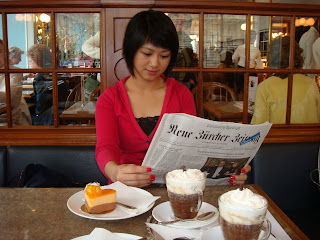 Acting intelligent
when I only knew Danke, Gutten Morgen and Welkommen in German *hehe
Next stop: Bern
So we walked to the Central train station and bought a ticket (46CHF for one-way = around S$65). 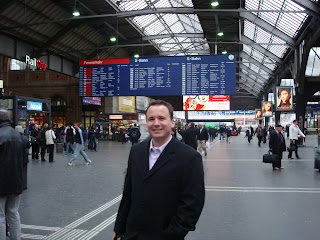 The Central main station. Only black and black jackets and coats heh!
The train is nice, fast, clean and comfortable. It takes merely 1hour to reach Bern *haha* and the view throughout the journey is wonderfully amazing.


There I was at 6pm at Bern. Dan and Kate were there to fetch me. We walked out from the train station and they showed me the Parliement House. Too bad we can't enter it then. FYI, Bern is actually recognized by UNESCO as a Cultural World Heritage Center :) I am lucky to be able to pay them a visit. 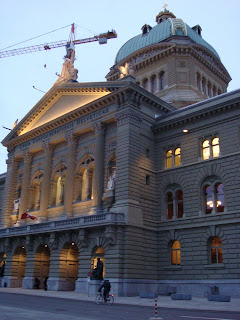 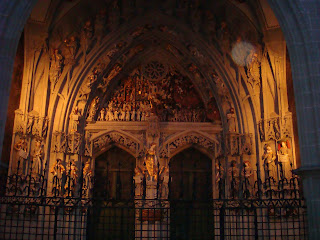 The 15th century Gothic Cathedral
The 'statues' above the entrance are divided into 2 parts: Left-Heaven, Right-Hell 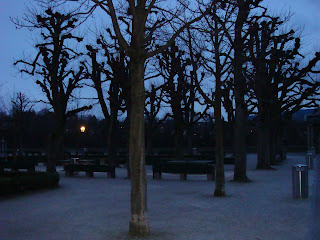 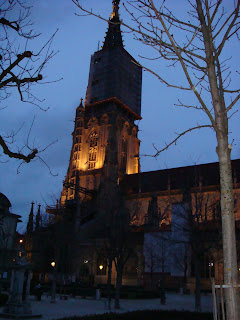 Here it is....
Okay...here is the funny story. We were supposed to reach home by 7.30pm for dinner with Dan's parents. So, to save money, we wanted to use the 1/2 fare ticket *which by right I was not supposed to as I am not a student there*. I might be fined if there's check. Anyway, after some arguments, I decided to give it shot. We couldn't be sooo unlucky heh!
hahaha... seriously, one stop after we entered, there was a check by an old lady. Oh my... Kate was worried, I was pretty worried too, but tried to stay calm. So, I told Kate...let's hop down when the bus stop *hahaha we did and we missed the check*. In the end, we walked home for over 25mins :)
Dinner was great. I experienced the traditional Swiss dinner: melted cheese and baked-potato. Although I was already full, I just couldn't say NO. They offered me different kind of cheese and we had a wine toast too. Followed by fruit salad and another cuppa coffee.

A long night chat followed straight away. And I went to sleep at 12midnight with a tired soul.
Woke up at 9am and we exchanged our presents :)
I received lotsa chocolates *Easter is around the corner, so you can find Bunnies everywhere* and a pair of Swiss glasses *cuteee.... 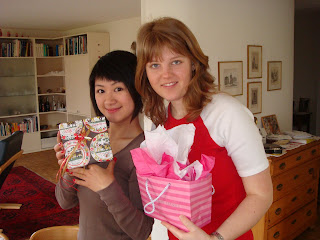 Introducing the pretty Kate :)
We were out for sightseeing after breakfast. We headed south to the Gruyere village. I almost ventured out of Switzerland... while driving, Dan pointed to the mountains and said: That's France *woo hoo... haha 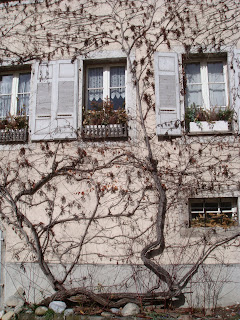 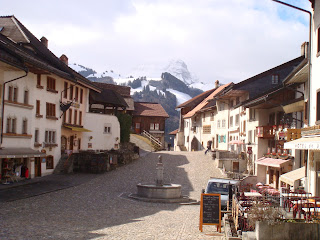 Here is Gruyere... it's kinda high above the sea-level so it was COLD.
And I can see snow traces on the ground :) 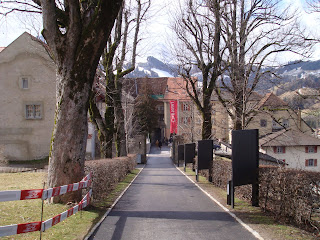 The path to the castle on top of Gruyere
After the village, we went to visit the Cheese Museum. Look at those cellars! 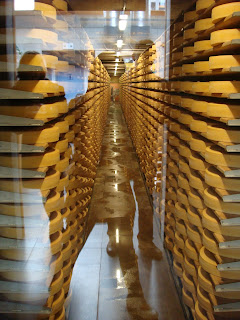 COOL heh!
Do you know that: 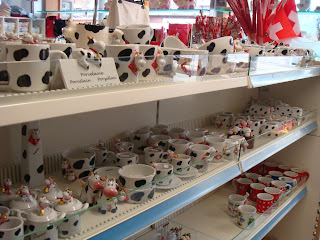 I've toldja... they are proud of their cows
Next destination is Lake Geneva. It spans across many villages, so here is one of them: 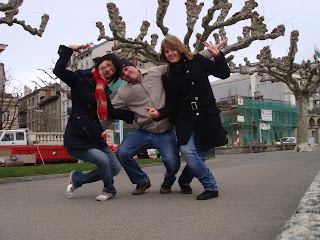 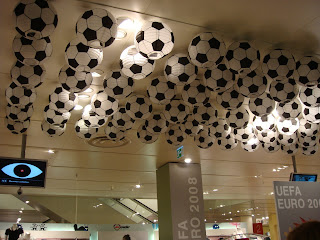 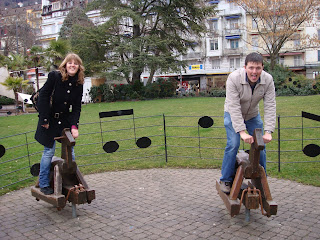 This was at Montroe, another village further away from Bern
There is always a childish side in every one of us 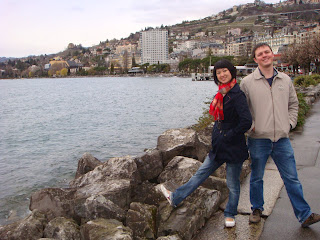 Here is the splendid lake... *thumbs up, toes up, fingers up 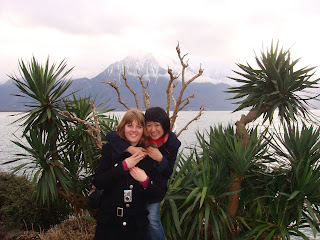 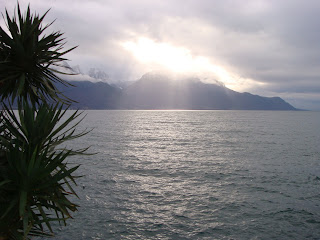 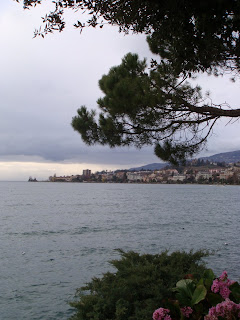 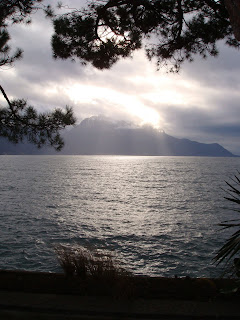 Frankly speaking, I did not want to return to Singapore. I love the country, it is so calm and serene. A nice place to retire from the hustle bustle of life. Love it even more because of the great friends I have there... Thanks much for the wonderful time and companion.
already missing you,
Ddee

Labels: ArOund The WoRld, FRi3nD$, HaPpiNesS