and the book award goes to....

Haven't been updating on my reading material for quite some time. No, I haven't stopped reading. Just that it takes more time to finish 'coz I only read when I feel like reading and when I have the time (aside from the tonnes of things to do).
So, here they are: 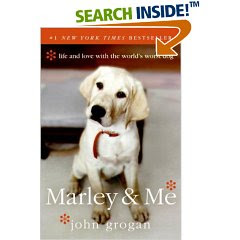 Marley and Me by John Grogan
From Publishers Weekly:
Labrador retrievers are generally considered even-tempered, calm and reliable;and then there's Marley, the subject of this delightful tribute to one Lab who doesn't fit the mold. Grogan, a columnist for the Philadelphia Inquirer, and his wife, Jenny, were newly married and living in West Palm Beach when they decided that owning a dog would give them a foretaste of the parenthood they anticipated. Marley was a sweet, affectionate puppy who grew into a lovably naughty, hyperactive dog. With a light touch, the author details how Marley was kicked out of obedience school after humiliating his instructor (whom Grogan calls Miss Dominatrix) and swallowed an 18-karat solid gold necklace (Grogan describes his gross but hilarious "recovery operation"). With the arrival of children in the family, Marley became so incorrigible that Jenny, stressed out by a new baby, ordered her husband to get rid of him; she eventually recovered her equilibrium and relented. Grogan's chronicle of the adventures parents and children (eventually three) enjoyed with the overly energetic but endearing dog is delivered with great humor. Dog lovers will love this account of Grogan's much loved canine.
Copyright © Reed Business Information, a division of Reed Elsevier Inc. All rights reserved.
There is going to be a movie based on this true-story starring Jennifer Aniston and Owen Wilson. How great is that! Am sure the shooting is full of fun, thrills and 'Marley's naughtiness'. This book is so honest and easy to read. I mean... you don't have to think that much (reading is supposed to be a form of entertainment too, isn't it?) and just enjoy what it has to offer. I laughed, I smiled, I cringed and I cried. Dang... a good book! even more for the dog's lovers out there :)

Yuhuu...there's a blog by John.. how interesting! 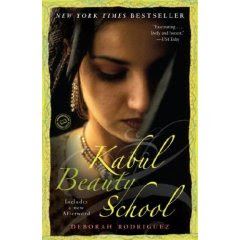 From School Library Journal:
Adult/High School–In 2002, just months after the Taliban had been driven out of Afghanistan, Rodriguez, a hairdresser from Holland, MI, joined a small nongovernmental aid organization on a mission to the war-torn nation. That visit changed her life. In Kabul, she chronicles her efforts to help establish the country's first modern beauty school and training salon; along with music and kite-flying, hairdressing had been banned under the previous regime. This memoir offers a glimpse into a world Westerners seldom see–life behind the veil. Rodriguez was entranced with the delightful personalities that emerged when her students removed their burqas behind closed doors, but her book is also a tale of empowerment–both for her and the women. In a city with no mail service, she went door-to-door to recruit students from clandestine beauty shops, and there were constant efforts to shut her down. She had to convince Afghan men to work side by side with her to unpack cartons of supplies donated from the U.S. The students, however, are the heroines of this memoir. Women denied education and seldom allowed to leave their homes found they were able to support themselves and their families. Rodriguez's experiences will delight readers as she recounts such tales as two friends acting as parents and negotiating a dowry for her marriage to an Afghan man or her students puzzling over a donation of a carton of thongs. Most of all, they will share her admiration for Afghan women's survival and triumph in chaotic times.
–Pat Bangs, Fairfax County Public Library, VA Copyright © Reed Business Information, a division of Reed Elsevier Inc.
I finished this book in less than I week, I think. It was just addictive and totally inspiring. My hotel-stay in Cairo was spent reading this book, on my bed, in the toilet, while watching TV, etc *haha. I am so much in love with true stories... and this one holds true. Seriously, simply irresistible and you get to know more about Kabul :) 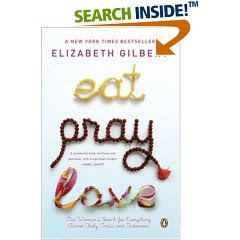 Eat, Pray and Love by Elizabeth Gilbert
From The New Yorker:
At the age of thirty-one, Gilbert moved with her husband to the suburbs of New York and began trying to get pregnant, only to realize that she wanted neither a child nor a husband. Three years later, after a protracted divorce, she embarked on a yearlong trip of recovery, with three main stops: Rome, for pleasure (mostly gustatory, with a special emphasis on gelato); an ashram outside of Mumbai, for spiritual searching; and Bali, for "balancing." These destinations are all on the beaten track, but Gilbert's exuberance and her self-deprecating humor enliven the proceedings: recalling the first time she attempted to speak directly to God, she says, "It was all I could do to stop myself from saying, 'I've always been a big fan of your work.'"
Copyright © 2006 The New Yorker
I was introduced to this book by Oprah *woohoo. To add to that, Hillary Clinton makes this on her list as well. Hm...there should be something about this book that hooks everybody, no? I am half-way reading this book... and so far, I like it. She started with Rome, a place that I've just visited and am going to visit again soon, so I can relate to its charms and uniqueness. Gonna bring this to Rome and finish it there, hopefully! 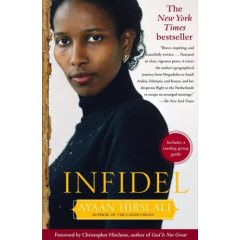 Infidel by Ayaan Hirsi Ali
From Publishers Weekly:
Readers with an eye on European politics will recognize Ali as the Somali-born member of the Dutch parliament who faced death threats after collaborating on a film about domestic violence against Muslim women with controversial director Theo van Gogh (who was himself assassinated). Even before then, her attacks on Islamic culture as "brutal, bigoted, [and] fixated on controlling women" had generated much controversy. In this suspenseful account of her life and her internal struggle with her Muslim faith, she discusses how these views were shaped by her experiences amid the political chaos of Somalia and other African nations, where she was subjected to genital mutilation and later forced into an unwanted marriage. While in transit to her husband in Canada, she decided to seek asylum in the Netherlands, where she marveled at the polite policemen and government bureaucrats. Ali is up-front about having lied about her background in order to obtain her citizenship, which led to further controversy in early 2006, when an immigration official sought to deport her and triggered the collapse of the Dutch coalition government. Apart from feelings of guilt over van Gogh's death, her voice is forceful and unbowed—like Irshad Manji, she delivers a powerful feminist critique of Islam informed by a genuine understanding of the religion. 8-page photo insert. (Feb.)
Copyright © Reed Business Information, a division of Reed Elsevier Inc. All rights reserved.
Have yet to start on this book. But expecting it to be good. All true-stories ARE good, aren't they??