having fun in HK and Alcatraz

I am back three days ago, but the laziness just can't get out of my body and soul *haha... my mind really asks me to update tho. Now, I am forcing myself to type on my HKG-SFO adventure.

This time round, it was a real FUN experience. Nice crazy crew, not-so-demanding pax, pretty chilly weather but kinda bearable and variety of delicious food. No wonder... I found slight bump on my tummy *hahaha. 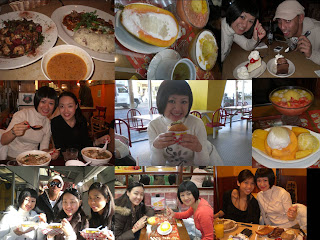 Our makan adventure....
Well, I was actually expecting a much worse flight. Remember when I mentioned that the crew always wished me luck upon hearing this flight??? Hey...somebody gotta do the job anyway. But it was pretty smooth despite the turbulence. Of course there were minor occurences that kinda got on my nerves: ehm ehm... shall not divulge them here. Nevertheless... it was FUN FUN FUN.
Our first stop was Hong Kong. We reached hotel at around 12 midnite. Too starving, we all agreed to go for a supper at a crew joint nearby. It was alright... a bit tasteless for my tongue and the chili was merely OIL *the next time you go to HK, make sure you have your chili with you owkay!*. After which, we headed back to the hotel after making a short stop at 7-11.
The next day, Julia and I agreed to go for lunch together. Who knows...15 mins before our meeting time, Angelina and Han decided to join us. Owkay...so there we were... on our way searching for another makan place. We ended up in a restaurant after seeing the flyer distributed by the auntie at the roadside. Hmph... the crispy chicken was yummy, but the fried rice was doubly big. Ah..they cost more as well -___-''
Continuing our journey, we walked around the Tsim Sha Tsui area *I think I am pretty familiar with it now. Our next stop was Shui Liu Shan, a dessert place. Woooww.... it's YUMMY!!
In the evening, we were on our way to San Fransisco - a 11hr 30mins flight across continents. I like the crew on this flight... they are nice and playful *hohoho. We've been discussing where to go in Fresco... some were definite about their shopping plan, some were busy with their friends... and WE?? We were planning to pay Alcatraz a visit :)
Upon reaching Fresco, it was chilly, but the sight of Market Street outside the hotel is fabulous. We went to a Thai restaurant for our dinner. The funny thing was that everyone was so talkative on the way there, but after the meal... we were simply 'stoned' and quiet. That means... time for a rest!
It was set. We were going to meet at 8am to book our ticket and then head out for breakfast. The trip to Alcatraz is popular, so you're advised to book in advance. True enough, when we booked, only 3 tours after 12noon were available. We paid for a 12.10-tour for $24.90.
Next, we took the train to the Fishermen's Wharf. It was colder than the night before. And from here on... I'll let the pictures speak for themselves! 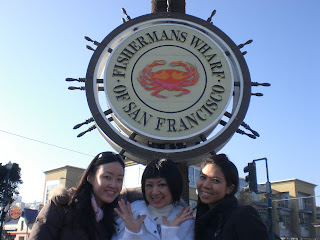 Julia, Ddee and Angelina at the Fishermen's Wharf.
It was too early when we reached there. So, we had a clam chowder soup from the street side before we headed to In & Out burger joint at 10.30am *they said it is a MUST try burger :) 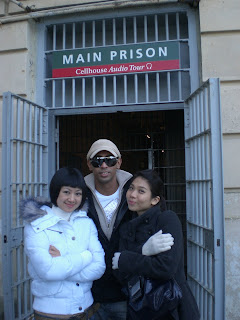 We took the ferry to the Alcatraz island ;)
once in a lifetime experience...
L-R: Ddee, Han and Angelina 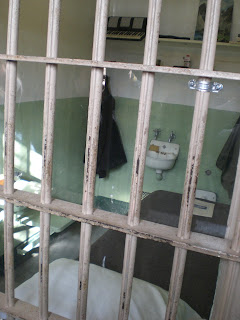 The 'tiny' cell for the prisoner 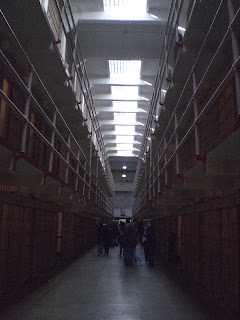 The aisle and its cells

The atmosphere was not as spooky as those Nazi concentration camp *like the small one in Gdanks, Poland. Maybe it is because it is simply over-commercialized. Or... the prisoners 'deserve' to be in a prison anyway, unlike the Jewish. But the audio tour was great as it comes with the real voice of the Correction Officers and the prisoners, including the background sound of the gates, fights and so on. 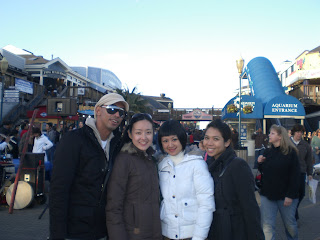 Later on... we headed back to the Fishermen's Wharf to take more pictures and see the sea-lions
Ow...we had Dreyer's ice-cream cone that tastes superb *miss the butterscotch finger ice-cream, can't find it here yet :( 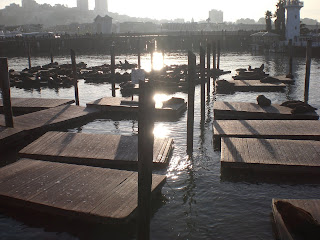 The cute sea-lions... *haha some of them are really fat 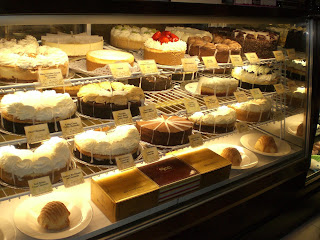 I never love cheese so much in my life
The Cheesecake Factory has the best cheesecake! 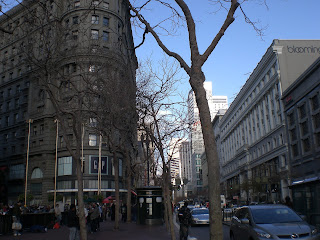 The Market Street is full of shops and malls

Back to Hong Kong....
The 'funny' incident was that the six of us went to Causeway Bay. The girls and guys splitted and decided to meet 3 hours later. However, after wandering around for less than an hour, the girls made up their mind to go to the Flower Market Street instead. We called Han...no connection. Hmpphh... what should we do?
Guiltlessly, we took off and had a shopping spree at Flower Market Street. We still tried to make those phone calls though. Slightly over 4pm, the guy called back using another number. Han said: "I am telling you, I am very angry now." Woopzz...
Interestingly, before he hung up the phone, he asked Angelina to send us a message (in this case: Julia and I): Be very careful on the flight!
Wahahaha...we couldn't stop laughing but yet feel their frustration at the same time. Sorry guys!!
In the end, we all reconciled and met up at Mongkok for a dinner *hahahaha....
Ah..and if you're wondering if something happened on the flight... NO, there wasn't. He is still the same nice guy ;) it was FUNNY nonetheless 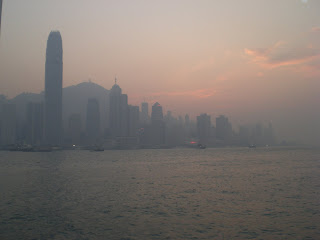 The view from the ferry on my way to Central - Hong Kong. Very foggy and poluted... 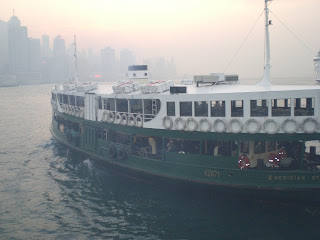 That's the ferry that cost me merely 2.2HKD haha *love it 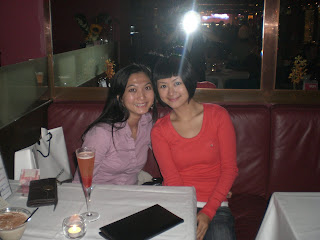 Not to forget....Phoebe!!!
Thanks for the evening and letting me staying over :)