Back from Hong Kong and Macau trip, but somehow I'm just too lazy to update it. So, I'm gonna copy from my sis, Nophie. Nah...it's not against copyright issue, coz we always share things. From food, clothes, to bed *haha*. Exceptions are made for shoes and boyfriends *hihi*
***
We (parents, sis and I) reached Macau International Airport at around 3 o'clock local time, we wanted to have direct transfer to Hong Kong but apparently the bus was full, so we had to get out from the airport, took public bus to the port and buy ferry tickets ourselves. It was rather inconvenient. Worse still, we took the wrong luggage >.<>

We decided to try the food in this small chinese restaurant about 5 minutes walk from our hotel. I ordered milk tea and the taste was....how should I put it...weird? Well, the milk and tea was too strong for me. I added a teaspoon of sugar but it still tasted the same. I guess, it didn't fit my taste buds at all. My dad ordered a glass of lemon beverage. It was weird too. It tasted a lil like salty water with this huge lemon in it. Sour bitter and salty. The food was good though. My mom ordered a meal package of white rice, roasted pig and veggies. My sis ordered a meal package of duck soup and rice. My dad ordered white rice with oyster soup. And I ordered noodles with salted veggies and meat. For all that, we paid HKD106. Overall, it was filling (although the provision of chilli would definitely make the overall experience even better!)
After dinner, we walked around the area blindly. Since it is Mongkok, the area was busy and crowded with people. We walked in to quite a number of stores, and some sales people can be really rude. I guess it was getting a lil late (around 10pm) and they were closing down. They can just tell you upfront to make your purchase decision quickly since they are closing down the store in minutes. I was like, OK, let's get the hell out from this store and look for the same product somewhere else since many stores sell similar products. It was rather eye-opening experience. Not that I never meet that kind of sales people before, but I was like "why can't they just be a little nicer?". It's just their way of living, I think. But there's this particular shoe shop with really nice sales people. They are young Hong Kong teenagers. They even tried to communicate with us in Mandarin and English. It was just outright funny. My mom and sis bought a pair of shoes there that cost only HKD100 (ard SGD20,-) for both. I was looking desperately for one that could fit me well but I guess I have feet that is too big for Hong Kong size haha. That's why I hate shopping for shoes! >.<
continuing my second day in HongKong....

We woke up at approximately 8 o'clock and headed out of the hotel at 9am. At first we were kinda confused as to where we would like to go. Disneyland? Nargh, we heard it is small compared to other Disneyland and quite dirty and disorganized now with loads of Mainland tourists overflowing the place. Besides, we have been to Disneyland in Anaheim and Japan. So we took Disneyland out of the list. My mom recommended Ocean Park as she watched the Dolphin Show before and would like to watch it once again. So in the end, we decided to go Ocean Park. First we took MTR from Prince Edward station to Admiralty. From there, we bought discounted entry tickets at HKD165 each (usually HKD185). We went up and bought bus return ticket at HKD21 each. So altogether, we spent about HKD700. Expensive!!
After a long bus ride (apparently, Ocean Park is in HongKong Island while we departed from Kowloon, so it took some time) we finally reached at about 10am and we directly went in.
Since we were all born with narcissism genes in our blood...it's PHOTO time!!! 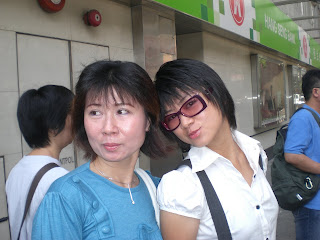 With my mom outside the hotel, right before we left to Ocean Park.
Do you like my purple specs? haha 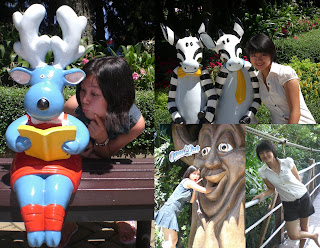 See, when I said I love my sis' cute facial expressions and actions...I mean it.
She's adorable *hee hee.. 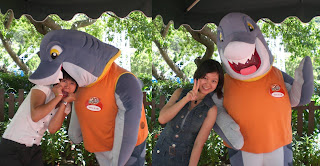 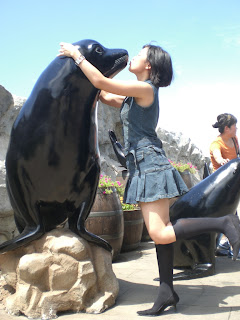 The shark was in love with Nophie, but Nophie picks 'Whisker' instead :) 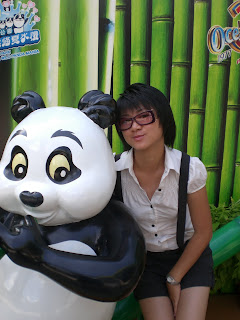 I pick the almost-extinct Panda *I love unique things haha 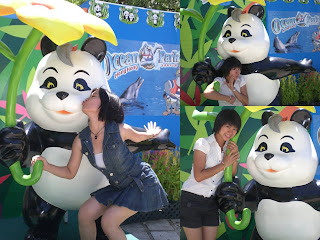 We got out from Ocean Park at around 3pm and it was freaking HOT! According to the weather man, it was 35*C and my face was burning. I am officially tanned.
Right after Ocean Park, we went to Tsim Sha Tsui to do some shopping. We walked around the area up until 8pm where we went to Victoria Habour to witness the famous Light and Symphony Orchestra. It was disappointing. The song wasn't good and it was too weak that I could hardly hear it. We went back to our hotel at 8.30pm.
End of our day? Hell no hahahaha.
We went out only after 10 minutes break to the well known Ladies Market. It's 10 minutes walk from our hotel. I never liked going to open market like this cos I am bad in bargaining. And as I mentioned before, the salespersons were extremely rude at one point that it always left me feeling outraged and unhappy. So much for being emotional haha. In the end, i didn't buy anything for myself. My mom bought a handbag, sis bought souvernirs and dad bought CD.
On our way back, my dad decided to have a haircut. All the hairstylists were youngsters. 3 of them, and they were cute hehe. I talked quite a bit with one of them since he was the only one who could speak english. Only in the end did he realized that I actually speak chinese too. My dad and I reached hotel at midnight.
Our last day in HongKong, we had a sumptuous YamCha with our relatives. After which, we left to Macau. Macau's weather was far worse than HongKong. We didn't go anywhere until 6pm when the weather was a little friendlier. The picture that my sis took inside the hotel: 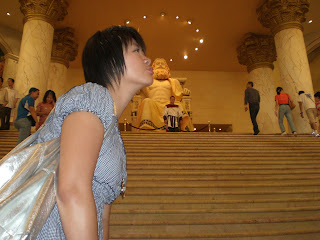 We first went to DA SHAN BA, the ruins of the portugal invasion with canons and so on (don't remember the exact name haha). Anyway, here's the photo: 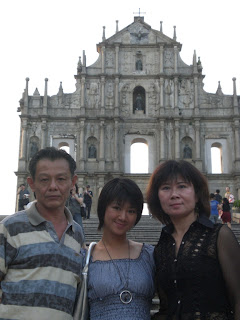 Dad, me and Mom 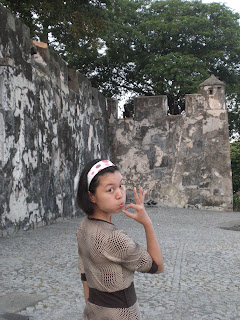 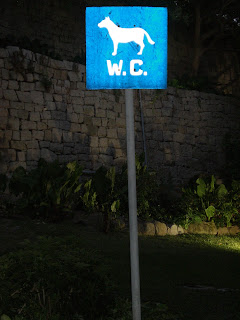 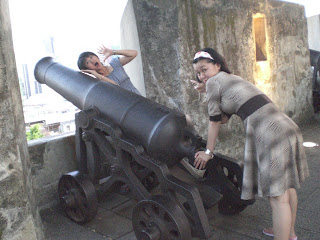 Woopz....don't kill me with your big canon, Nop!

The night scene in Macau... full of lights and casinos. But Hong Kong is much more marvelous with its lights :) 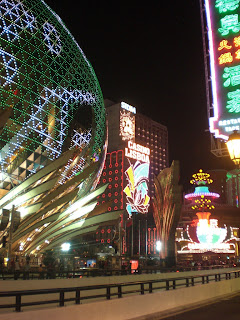