The PC couldn't detect my camera haha so well, more pictures from Kyiv. Dnepropetrovsk pictures will be uploaded soon. Ciao.. 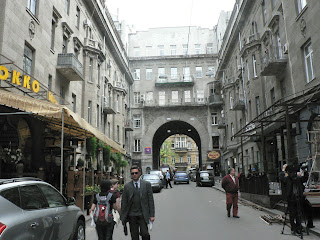 One of the small lanes at Kryshatik, Kyiv, with luxurious branded boutiques and cafes :) 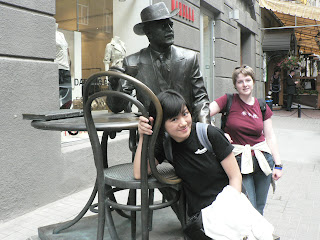 Me, Anna and the metal man *hoho 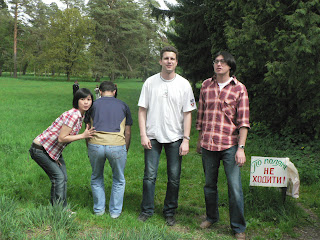 I watched the students' performances yesterday and today. It's the end of the school term, so they had to perform on stage... dancing, singing, acting and so on. Everyone was involved. It was so FUN FUN FUN to look at them, the beautiful costumes, the nice music and songs, their body language, facial expression and acting skills.

I don't understand what they said... BUT I love it.

And I got roses from the graduating students... *hiks hiks so touched. They are wonderful :)

Let's see some 'FIRSTS' that I encountered here:

- My first and second Birthday Party celebration in Ukraine.
The first one was for Yulia Penko, the reception coordinator. It was at Dasha's small cosy room, her bestfriend. So, we sang songs in different languages and gave testimonials. Everytime we finished our 'message', we would do a 'cheer'. I was bloated by the end of it.

The second one was for Alex, the VP IS. I didn't know him before his Birthday, but we went to Sfera, a club to celebrate his Birthday. We played some games before we started everything, and I was chosen as one of the participants for one of the games. It's like they'd sing a song in Russian, and I had to act them out. The keywords: 'heart', 'cool boy', 'likes playing around' or I called it 'playboy' and 'making love with lotsa girls' -__-''. Geez... I was pretty scared *haha* coz I didn't know what the games was. But y'know what... I WON the games, I was so good in acting out these 4 terms that I won and received a heart-shaped soft-toy from Alex *hahaha*

- My first Japanese meal in Ukraine, courtesy of Sergei. He invited me and friends to the restaurant where he works. Well, we didn't know much about him, we met him in the bus and he asked my friend for my contact. Not bad huh! Too bad... I don't speak Russian, and he doesn't speak English. He speaks fluent Russian, not Korean, for he's been staying in Ukraine since he was a kid *or so I think*

- The very first Hip Hop Dance performance that I watched in Ukraine. It was Vova's dance exam. Gosh...I gotta say this, "YOU ARE FREAKING COOL, DUDE!!" It was superb..I watched it live, 4 metres from the dancers hahaha they jumped, crawled, puched and so on. It was H-O-T... I recorded all his dance performances *hahaha* I'm gonna show you guys when I'm back k. You'll be famous Vova! Anyway, I told him that I wont be attending the Global Village this Sunday if he's not gonna dance *lol... nice threat

- can't think of anything else now...