I've spent three Februaries *if there's such word* in Singapore, and thus far I never miss the Chingay Parade albeit the complaints that came out from my lips.
It is Asia's grandest floating parade or that's how they boast themselves. Well, the whole Orchard Road was blocked for at least two days just for Chingay to take place *so yah..it's huge event*.

My first Chingay was when I sat on the roadside and saw Jackie Chan in his white suit flashing his smiles. It was cool as everyone can join in the parade for free. Just grab any space and enjoy!

So, for my second Chingay, I had the same expectation. Just go early and get a great place to view it. But I was wrong. That time round, they baricade the roadside and only those with tickets could go in, although you could still watch it from the roadside and smell the one next to you at the same time. It was free entertainment, who doesn't want to miss free stuff in Singapore? Too bad, I was surrounded by many ang-mohs and I could barely see the parade and performances under the 'crying sky'.

Thanks gosh, I got free tickets from AIESEC for my third Chingay. Without a doubt, I took the chance to invite my sis, Nophie, my Japanese friend/sister, Itsumi and Oscar along. Well, I was left with six extra tickets on my hands as they had things going on and had to give it a miss.

So, there we were...sitting on the half-wet-half-dry floor in front of a group-of-super-loud-young-teens-who-kept-moving-forward and behind a couple-who-was-very-annoyed-and-freaking-pissed *hahaha*. Nice combo!

We waited for more than 1.5 hours before the parade really began. Geez..it was quite dry initially 'coz they stopped performing when they arrived at our area *we were sitting quite a distance from those VIPs seats* and as we all could notice, no one really responded to the performers too. No claps, no screams, no crazy stunts from the audience... Poor guys!

As the night walked away, we slowly found it more appealing when we started running to the front row and took pictures with the performers. Who cares about the crowd controller? It's hell no FUN sitting there watching them 'dancing and entertaining' us. It was a warm night and Itsumi could not really take it I suppose. But she did have lotsa fun too. Look at her stunts below! 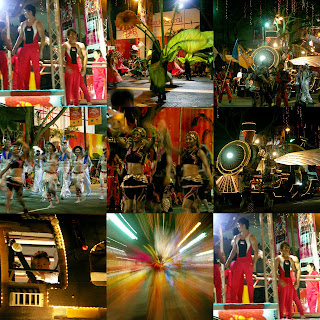 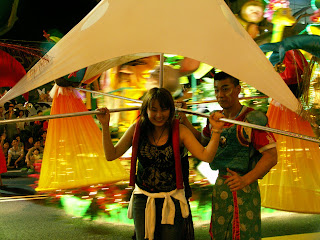 And you think carrying this is easy? Think again..
It was scary *haha..my first time trying it*
Itsumi was scared to death when the guy just grabbed her and asked her to do it..
and later pushed her to run away from us! 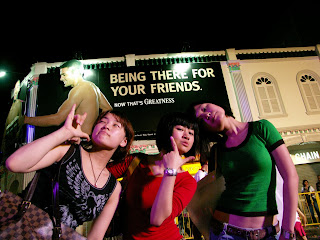 Yup *nod nod* being there for your friends! 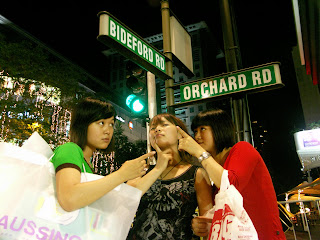 Where shall we go? Japan? Vietnam? Rusia? Turkey?
Owh...we're still in Singapore *sigh 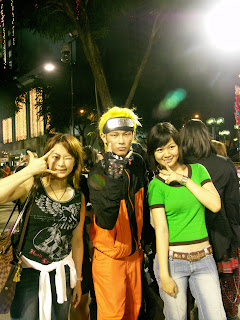 Naruto was so shocked when the three of them *means NOT me* shouted their lungs out for 'Naruto' at the post-parade party. Wakaka...should see his face lar!

When the fun starts, we won't let you kiss him Itsumi! *haha

[L-R, top]Chingay - Parade of Dream
Naruto and his gothic gank
[L-R, bottom] A kind and his four wives
Outdoor street party is cool..
So, there goes my Saturday evening. Next update will be our Sentosa adventure.