Dedicated to a friend out there :)


Hope is a good thing, maybe the best of things and no good thing ever dies. Hope sees the invisible, feels the intangible and achieves the impossible. Hope is the waking mans dream.

"It is not the critic who counts, not the man who points out how the strong man stumbles or where the doer of deeds could have done better. The credit belongs to the man who is actually in the arena, whose face is marred by dust and sweat and blood, the man who strives valiantly. Far better it is to dare mighty things, to win glorious triumphs, even though checkered by failure, than to take rank with those poor spirits who neither enjoy much nor suffer much, because they live in the gray twilight that knows not victory nor defeat."
~ Theodore Roosevelt

You gotta stand still, and this is just a beginning. Fighto!!
Strive to be the world's greatest *.^ coz I know YOU CAN.

"The World's Greatest"
by R.Kelly

I am a mountain
I am a tall tree
Ohhh, I am a swift wind
Sweepin' the country
I am a river
Down in the valley
Ohhh, I am a vision
And I can see clearly
If anybody asks u who I am
Just stand up tall look 'em in the Face and say

The HULKAS, my Orientation Group for Indonesian Get Together Day 2006, finally has our first official outing. Although not everyone was able to make it, but no worry we still managed to have lotsa crazyness in the house.

Initially, there was an idea of going to Genting Highland and sneak into the casino. Yet, since many of us couldn't make it, we then scrapped the whole idea of KL or Genting. We decided to pay Johor a visit instead.

So, on a bright Tuesday morning, we stepped our feet at Johor and went directly for lunch. Arrived there around 11.20am, we surveyed a few restaurants, hawker centres as well as the infamous Sushi King *hiks..I want. Later, food court is still the best choice as anyone can order whatever they want.

I ordered chicken-mushroom hotplate noodles that cost me only RM 5.25 [around S$2.2] and rainbow Lychee cocktail for RM 2.80 [still cheap lar]. Some of them ordered teriyaki chicken that took ages to come..haha and it's not as nice as expected. 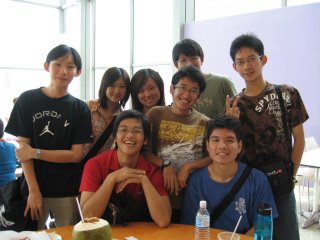 Pose after lunch! Dessert in disguise
Later, we headed for some shopping but ended up playing at the Games Centre. Oldies DDR, car-racing Daytona, and so on were on the list. At this point of time, I excused myself to go and get myself a haircut (can't stand the bang alrd, kept poking my eyes).
In the end, they waited for me at the Games Centre as I took almost 1.5 hour just for a haircut *eh...not my fault also mah*. My hair is short now... 'super short' as Pheebs put it *haha*
Someone even said I look like 15 years old -___-'
Main menu of the day is KARAOKE!!!
An-de-lu was the most hilarious karaoke man. He basically just sang everything on his own. Thanks gosh nothing got broken at that time.
From 2.45-6.15, we had a great time there laughing, singing, dancing, shouting, etc. It's an affordable stress-reliever. Come on...for a karaoke session that includes 2 drinks [1 drink can even change to finger-food] and cost you merely RM16,-...isn't that a good deal?? 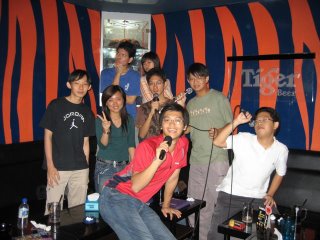 HULKAS in action.... We can sing, we can dance, what else can't we do?
Introducing new member in the house: Gunawan 'Miss Indonesia' - Kevin's roomie 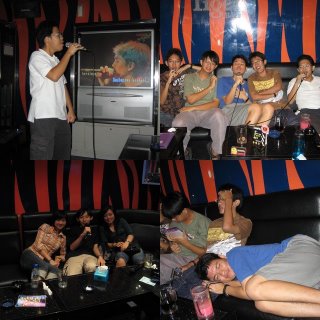 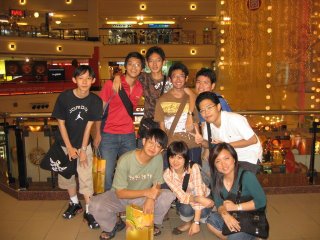 After Karaoke and a yummy brownies with ice-cream... a pose won't killja! 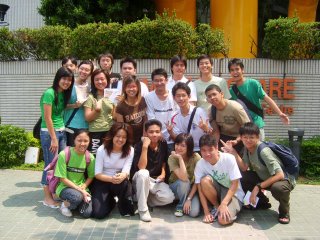 This is the complete HULKAS family, from freshies, Group Leaders to Senior Attach
taken in August'06.

An outburst won't kill ya...

Friends sharing is the best I could ask for...

Sorry if I made you worry...

I've visited more than 20 countries thus far within my 22 years presence in the world.
I shall extend my wings to more countries in the years to come...maybe. As a friend mentioned his friend's ambition: to travel to more countries compare to his age.

Btw, I finish my exam on 24th November and I have roughly a week of 'holiday' before the work starts plunging in. So, anyone wants to accommodate me during that time? Anyone from the other side of the Asia or even the world?

Let's see...Vietnam? Taiwan? anyone? join me?

ps: Thanks Nes for informing me. Always thought Venice is a country *muahaha

Lazy to type a new update, so I'll just copy paste from my AIESEC in NTU blog *hehe*
Besides, mid term is around the corner and the clock is ticking...
***
I am back from Poland.
I am excited
I am motivated
I am sad
I am in dilemma
I am anxious
I am worried
I am... 'entangled'

If you asked me how was my first International Congress?...
Ehm...give me the world's best dictionary and find me the best word that is even greater than AWESOME...
That would be my answer!!

I departed to Poland with Phoebe on 17th September by FinnAir. I left Singapore with Phoebe 'Pheebs', my MCVP-OGX [Outgoing Exchange]. Being the bubbly gurl as she is, we spent quite some time sharing stories, catching up gossips and then successfully fell asleep throughout the flight. I am pleased to travel with her as I click best with her too.

The other four: Sharon, Jing Wen, Adam and Sherina departed the same evening by KLM and had a stopover at Amsterdam. Imran joined us on 19th.

However, the officer at the airport was so darn irritating, he treated me like a terrorist. Guess what? He works in Changi Airport to your astonishment k. Hey...as Russel Peter puts it, "Be a man, do the right thing!" You should at least know how to treat a woman with respect and politeness, shouldn't you? ...... whatever......

My stay in Poland was superb, it's beyond description. Well, I just don't want it to end... ever. Back in Singapore now is like a hard slap on the back to wake us up, to welcome us to the reality after a half month trip in the dreamland *sigh*

Arrived in Poland, Phoebe and I travelled by ourselves in Warsaw on the first day. From finding the underground METRO, strolling at Old Town, having early dinner of delicious home-made pizza, losing our way to the hostel, getting to know how to use the public phone, and finally to finding the direction to the places using our intuition. This was a superb experience. It's tiring but it's FUN FUN FUN.

Pheebs and I spent our time strolling at Warsaw Old Town. A very unique, romantic square with nice designs on its buildings. It's just awesome and super chilling. We were just stranger in this Polish land.

On our second day, we went to join the study tour to Gdansk. Joining us were delegates from Hong Kong, Slovakia, Czech Republic, Malta, Korea, Switzerland, Panama, Germany, Poland, Bahrain, Canada, and not-to-be-missed Singapore. We had so much fun together. From a smooth journey to a breakdown bus, from bread to a nice Kashubian dinner, from Old towns to castle and concentration camp, from party to party....we conquered all!!

But...at the other side of the country, the rest of the Spore delegates went to Krakow with the Malaysian delegates. Surprisingly, they met Brodie [the tall guy at the bottom left pic], the President of AIESEC International 05/06 at Warsaw Old Town.

Well, International Congress encompasses everything. From play, fun, work, discussion, passion, commitment, willingness to learn and explore, challenge, hard-work, patience, diversity and so on... we HAD it all.

There were 570 delegates from 95 countries and territories. 200 externals from the corporate. AIESEC International and facilitators and congress committee that are up to 100ppl.

Kaya is in the house. Too bad we do not have a toaster or else we would have open a Kaya toast stall. Uniquely Singapore fan is one of the faves too.

UBS Gala Dinner at the largest Theatre Hall in Poland. You guys are gorgeous!

There is always time for candid pictures. Crazyness is in our blood!! *yeay...

My 1st IC hopefully will not be my last IC. For those who were not there, you got the chance..It's up to you now. But I can ensure you that it is going to rock you life...well, at least IC ROCKS mine.

Ow yeah...one more thing, post-conference down syndrome is still ON.